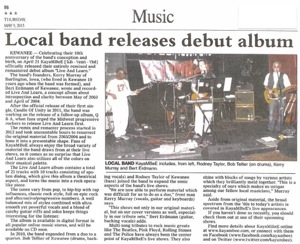 On May 9, the Kewanee StarCourier published an article featuring KayaMBeE. As previously posted, the Article “Local Band Releases Debut Album” talks about our recently released remixed and remastered album, Live And Learn.

Since not all of our fans and followers had access to the Kewanee Newspaper
, here is what the Star Courier printed on May 9.

KEWANEE – Celebrating their tenth anniversary of the band’s conception and birth, on April 21 KayaMBeE [\’kā\ – \’em\ – \’bē\] have officially released their entirely remixed and remastered debut album “Live And Learn”.
The band’s founders, Kerry Murray of Burlington, Iowa (who lived in Kewanee 10 years ago, when the band was formed), and Bert Erdmann of Kewanee, wrote and recorded Live And Learn, a concept album about introspection and clarity between May of 2003 and April of 2004.
After the official release of their first single, Candle Of Unity in 2011, the band was working on the release of a follow-up album, Q & A, when fans urged the Midwest progressive rockers to release Live And Learn first.
The remix and remaster process started in 2012 and took uncountable hours to resurrect the original material from 2003/2004 and to hone it into a presentable shape. Fans of KayaMBeE always enjoy the broad variety of material the band draws from at their live shows, so it comes as no surprise that Live And Learn also utilizes all of the colors on their musical palette.
The Live And Learn album contains a total of 21 tracks with 10 tracks consisting of spoken dialog, which give this album a theatrical aspect, and turns the music into a rock opera-like piece.
The tunes vary from pop, to hip-hip with rap influences, classic rock style, full on epic rock and alternative/progressive numbers. A well balanced mix of styles combined with ultra smooth yet powerful vocals and a blend of catchy guitar riffs and solos keeps things quite interesting for the listener.
The album is available in digital format in all popular online music stores, and will be available on CD soon.

In 2010, the band expanded from a duo to a quartet. Bob Tellier of Kewanee (drums, backing vocals) and Rodney Taylor of Kewanee, IL (bass) joined the band to expand the sonic aspects of the bands live shows.
“We are now able to perform material which was difficult for us to do as a duo”, front man Kerry Murray (vocals, guitar and keyboards) says.
“This shows not only in our original material, but on our cover versions as well, especially in our tribute sets” Bert Erdmann (guitar, backing vocals) adds.
Multi-song tributes to rock music greats like The Beatles, Pink Floyd, Rolling Stones and The Police have always been the center point of KayaMBeE’s live shows. They also shine with blocks of songs by various artists which they brilliantly meld together. “This is a specialty of ours which makes us unique among our fellow local musicians” Murray said.
Aside from original material, the broad spectrum from the ‘60s to today’s artists is covered in KayaMBeE’s live appearances.
If you haven’t done so recently, you should check them out at one of their upcoming shows. 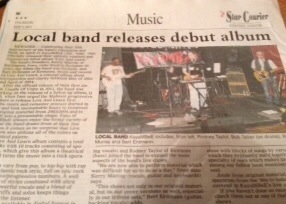 You should be able to find a copy of today’s Star Courier at the local news stand.